From EosPedia
Jump to: navigation, search

TEM images are generally shot as demodulated according to the shooting condition. If trying to interpret the shot images as they are, a problem will occur. In particular, for biological samples which have low contrast, TEM tries to increase contrast by increasing the defocusing quantity. Consequently, the image is demodulated greatly.

Thinking in a real space, the image observed is an image where PSF (Point Spread Function), which shows how each point on the real image expands, is convoluted for each point.

On the other hand, in an inverse space (Fourier space), the image observed is Fourier-transformed by calculating production between the true image and CTF (Contrast Transfer Function), which is generated by applying the Fourier transformation to PSF (Point Spread Function).

This section summarizes contrast compensation methods as calculating the influence of CTF using Eos commands and understanding the meaning of TEM images.

To obtain images demodulated by CTF

Eos has a program, ctfDetermine, which determines CTF parameters (defocusing quantity) automatically. These parameters can be determined if the SN ratio is sufficiently high and an area called a tone ring in which contrast is zero appears clearly. This program does not support astigmatism currently.

So, use the ctfDisplay command if data such as cryo-EM show small contrast, if the SN ratio is not enough, or to confirm the automatically determined defocusing quantity.

In this section, let’s use ctfDisplay to determine CTF parameters using the supplied data.

First, let’s execute the simplest method. Use mrcImageFFT to Fourier-transform the image initially. Then, use ctfDisplay to determine the defocusing quantity.

The determined CTF parameters are saved in a file named example.ctfinfo. Then, CTF is to be compensated using this file.

Hereinafter this section describes easy usage of the ctfDisplay command. Download the data from (Media:example.mrc, Media:example.fft).

By specifying the command line like above, this command can be executed. File .ctfinfo is set up automatically even if not specified, and data of the file are read in if the file exists. As a result, the following window is opened. 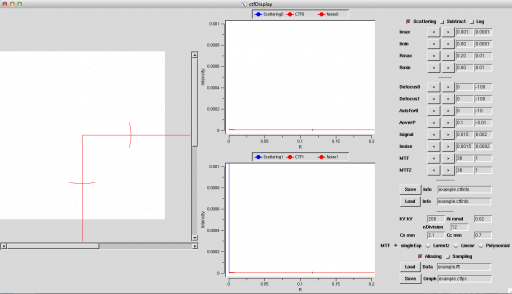 In this window, the left-hand pane shows the Fourier-transformed spectrum, the middle panes display the graphs generated by averaging that spectrum in the angle direction, and the right-hand area displays various parameters for CTF.

Quote CTF using the procedure below:

1. Adjust Imin or Imax so that a spectrum appears. The spectrum can be detected more easily when the Log button is pressed. If you are not sure, set Imin=0.00001 and Imax=100000, and press the Log button. A blue spectrum will appear somewhere. After that, set up the parameters as looking at the range of that spectrum well. If you know parameter values initially, you can set them up from scratch by specifying like below during start-up:

3. Then, adjust noise level. Although this operation is not related to CTF compensation itself generally, it is useful when determining CTF. The parameters to adjust noise level are Inoise, MTF0, or MTF1. Either the exponential function type or the Lorentz type can be selected as a MTF type according to the medium such as CCD or film. MTF0 is the parameter of the exponential function type, and MTF1 is the parameter of the Lorentz type.

※ Note: Inoise and Isignal are different from the displayed values of I (including Imin, Imax; those are powers and are square of intensities. A possible confusion comes from using the same symbol I. Taking the square root may help adjusting.

※ MTF can be different depending on axes. Main cause is a drift. The current version does not deal with multiple MTFs.

5. Set up the CTF parameters.

Ai values vary largely depending on the illumination conditions. It is the important parameter to determine the shot conditions.

5-4: Set up a division number. This parameter does not need to be changed generally. Lower this value if the SN ratio is low at any cost.

6-1 If the tone ring is an ellipse, set up the angle of AxisFor0 so that the long and short axes of the ellipse align with axes 0 and 1, respectively. It is no problem whichever of the long and short axes aligns with axis 0. When those axes are aligned with each other successfully, the concavity and convexity of the signal (blue line) become clear most.

6-2 Adjust defocusing by changing the defocus 0 or defocus 1 parameter, respectively so that the trough of CTF (red line) comes to the dent (tone ring).

6-3 The shape of the first tone ring can be explained well by adjusting Isignal, Ai, or defocus parameter skillfully.

When all are set up well, you will see this on screen. 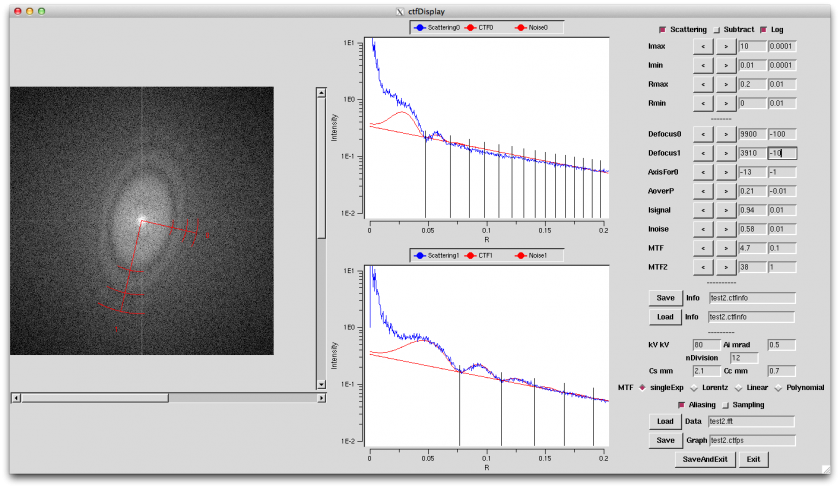 7. Press the Save button to save the parameters.(output CTF info. file)


To compensate demodulation by CTF

The mrcImageCTFCompensation command compensates CTF based on the information on CTF output by ctfDisplay. By specifying like below,

only phase can be compensated in the CTF parameters.

To use mrcImageMultiCTFCompensation, alignment must be performed in advance among the images overlaid with each other. To increase the precision of alignment, it is preferable to use the respective images after their phases are compensated.

The example of this tutorial (example.mrc) shows cross-sectional images of a chlamydomonas flagellum demodulated by CTF. The entire picture is just an image on which black and white are inverted. However, you will find that the shape and position has become greatly different by observing the images, especially the shapes of protein molecules (outer arm dynein).

Let’s observe the images by Display2.

By comparing the original and compensated images, you will recognize that the entire structure has not been changed so much, but the structure in the order of nanometer has become greatly different. In short, compensation of CTF demodulation (hereinafter simply called CTF-compensation) is not needed particularly to observe the structure of an entire cell, however, such compensation is indispensable to argue minute structures of the protein level. 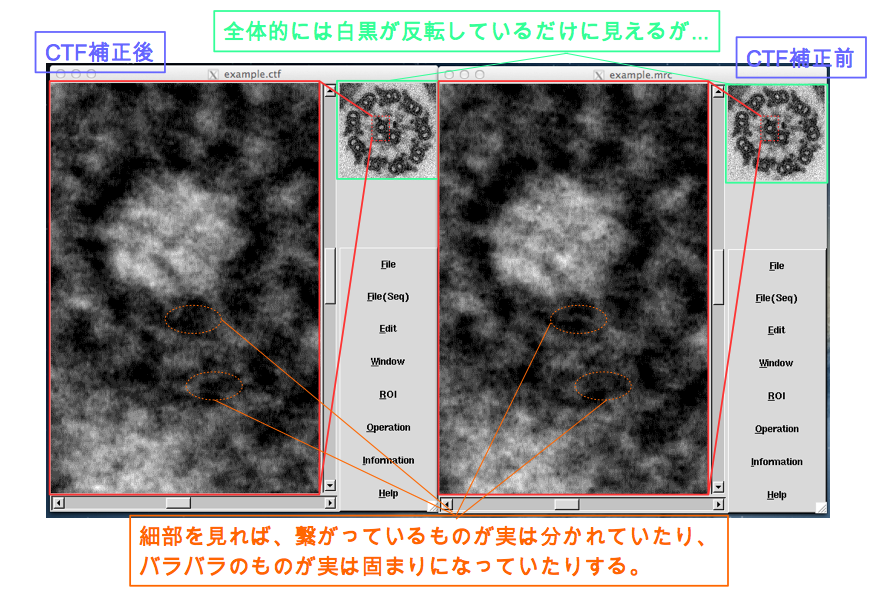 Images are generally pre-processed a bit more. Hereafter this section describes an example of Makefile used for very general CTF-compensation. When typing like below,

a help file to execute making is displayed. By typing like below,

DispCEN, DispCTF enable us to see the images (of a central part) before and after the CTF correction
command example
After the run (Display2 opens), 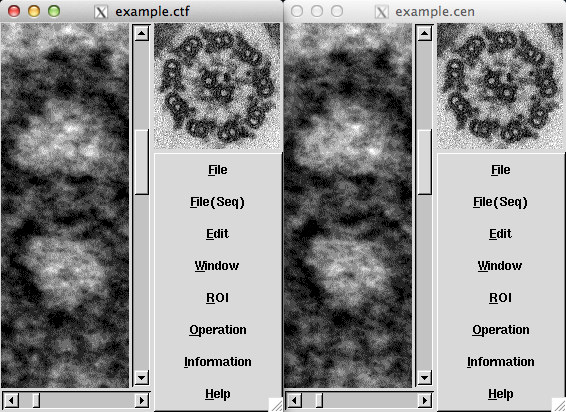 comparison before and after the correction can be made。

An example is given using another image.

The following command does 1) make a simulated image (.prectf) from the original image(.inimrc) using mrcImageCTFObservation, 2) and then aplies CTFcorrection against the simulated image.

The following commands, which use the Makefile in example 2, are for comparison between "before" and "after" CTF correction of the Siemens star image.

As shown below, by changing an option (mrcImageSiemensStar(-Shape)), you can observe the changes due to CTF correction of he Siemens star with Cos-type or with a linear feature.

In the images with a sine wave feature (images in the real world), the grey ring and the inner black and white patterns, observed before CTF correction, are not restored.

Usual images contain noises. Here, you will see if the CTF correction does work for such images.

Using this Makefile, images with the increasingly larger NS ratio are shown.

In ctfDisplay, noise-plus graph has more intensities over the whole frequencies than the noise-free graph.

The images of a field with different amount of defocus are shown.

The command below will do steps from the image creation to CTF correction for the images with a defocus range of 0 ~ 54000.

When the amount of defocus is increased, the grey ring after the CTF correction gets larger, the inside the ring (representing high frequency components) gets blurred and the outside gets clearer (with a higher contrast) more or less. With excessively large defocus, a black and white pattern outside the original image appears (a false feature) . FFT images show that the increased defocus reduces high frequency components.

As increased degree of defocus deprives high frequency components, the CTF correction is not effective in restoring high resolution details.


Example 6 Averaging of images with different amounts of defocus

We will see the effect of averaging images (of the same field) with different amounts of defocus For this purpose, mrcImageMultiCTFCompensation command is used for making the averaged image. As this command uses a weighting incorporating the CTF effect for averaging, it reproduces finer details than the mrcImageAverage command which does a simple averaging.

The following commands calculate the images with different amounts of defocus from a Siemens star image, and then applies the CTF correction (for each image, ctfDisplay is called. This is the same as before).

Then the the following command outputs the averaged image of the two correctd images.

The following command does CTF correction against plural images.

The following command prints the CTF corrected image in the tiff format.

In the two cases, the interpolation is done by averaging. However,mrcImageMultiCTFCompensation gives the clearer image.

By averging the CTF corrected images, we get an image with clearer black-and white patterns up to the center.

The averaging makes the images closer to the original

Example 7 Averaging of images with different amount of defocus 2

The same comparison will be made using a different image file.

By averaging the corrected images, the resultant image gets closer to the original image with respect to the white dots in the right-hand side and the structure of the white dot in the center lower part.

More than one CTF-compensation programs are available in addition to Eos. They are as follows: • CTFFIND